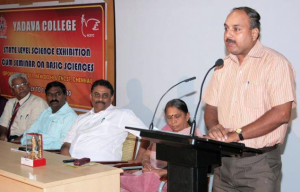 Scientists and research scholars must work on projects and conduct research to meet the needs in villages and local-specific problems since, in most cases, the benefits of high-end research never reached the poor and the rural populace, said Ravinder Gaur, Scientist, Department of Science and Technology, New Delhi, Addressing a seminar after inaugurating a State-level exhibition on basic sciences at Yadava College here on Monday, Dr. Kaur said that his department provided adequate grants to research projects that focused on developing rural areas in a scientific manner. Highlighting the fact that drinking water of good quality was scarcely available in rural areas in the country, he said that researchers should work on the effect of fluorosis on people.

Speaking earlier Dr. S.Vincent, Member, Secretary, Tamil Nadu State Council for Science and Technology (TNSCST), said that the State government had been concentrating on basic sciences to a great extent at the higher education level. The TNSCST would provide five student fellowships to the M.Phil. Scholars of Madras University who work on projects such as impact of global warming on health, agricultural production and animal husbandry. The State Ministry of Higher Education had allocated Rs. 1,600 crore for higher education. Tamil Nadu had a Gross Enrolment Ratio of 17.5 per cent in higher education which was higher than the national average of 12.5 per cent. The Government had fixed a target to achieve 25 per cent by the year 2020. Mr.Vincent asked the students taking part in the exhibition not to replicate the models already designed but to innovate and come up with something new with their own ideas.

The District Collector of Madurai District, Mr.C.Kamaraj delivered the valedictory address and presented the prizes to the winners of the competition.
A. Padmanabhan, Principal (in-charge), and Dr. P.S. Navaraj, Associate Professor in Zoology successfully co-ordinated and meticulously organized this programme with support of management, faculty and non-teaching members of the college.

Awareness on Consumer Disputes & Remedies on 23.2.2021 organized by Dept. Commerce IT

AWARENESS ON COVID-19 & DISTRIBUTION OF LIQUID HAND WASH on 15th February 2021 at 12:00 noon organized by Dept. of Computer Applications